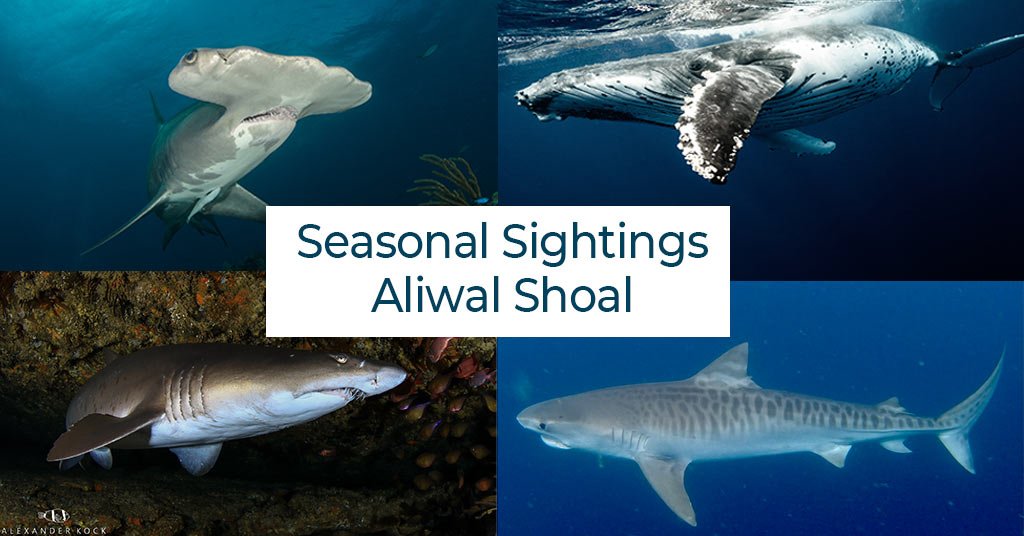 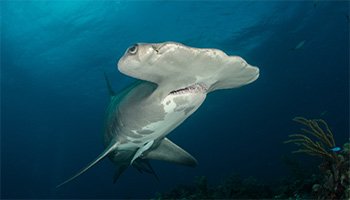 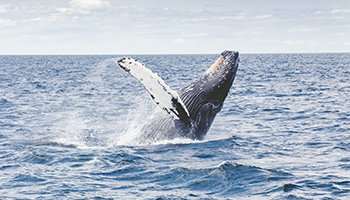 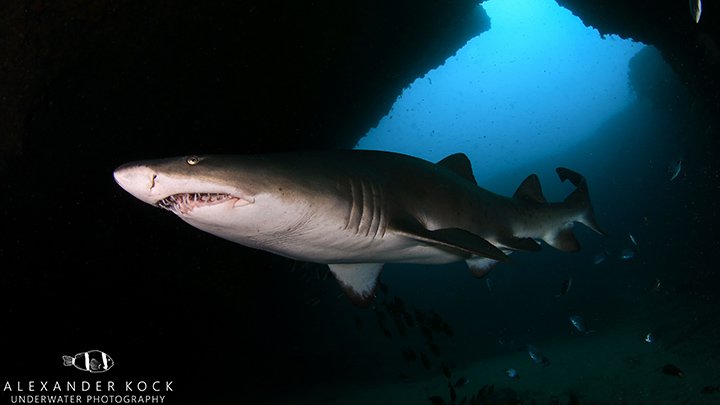 The above list is simply to give an idea on when is the best time to see specific seasonal sightings on Aliwal Shoal, but often is random and some species can be seen all year round.

The above list only mentions the sightings that are popular to Aliwal Shoal. There are still many species that can be seen whilst diving this reef, which are not mentioned in this article. Click here to find out a bit more about diving Aliwal Shoal.

First being the Ragged Tooth Shark Migration and the second being the Humpback Whale Migration. Due to their predictable migratory patterns, we have specific seasons for when you have a better chance of spotting the migrating marine life!

The Ragged Tooth Shark (Raggies) or also known as the Grey Nurse Shark congregate to mate on the reef systems in the northern Eastern Cape and the Southern waters of KwaZulu-Natal in June to November.

One particular reef system that they gather to is Aliwal Shoal, where in peak season diving Aliwal Shoal one can encounter over 100 on one dive.

The pregnant female Ragged Tooth sharks travel further North (some seasons as far as Southern Mozambique) to gestate in the warmer seas. One particular reef system you can spot the gestating females Is in Sodwana Bay.

Due to the Ragged Tooth Shark migrating so close to the coastline, they fall victim to the shark nets that are placed along the KZN coastline, as well as the trawlers that fish on the outskirts of the Marine Protected Areas.

There are a number of Whale Migrations that occur, and we are lucky enough that South Africa is one of the locations on the list!

The whales are usually present during the winter months, which is usually mid-June through to the first week of September. Some years they like to arrive a little bit early and some years they are a bit late to the party, so if you are wanting a sure bet to spot the whales in Aliwal Shoal, I would suggest planning your trip July/ August.

The humpback whales got their name due to the hump shape that forms along there back as they dive down from the surface. 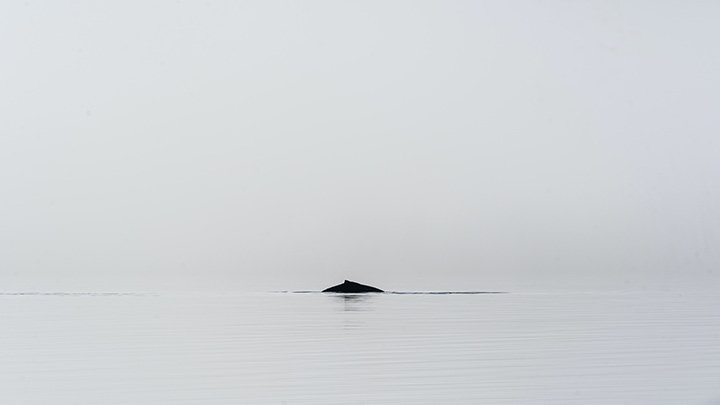 The whales start their migration in the Antarctic waters where they predominantly feed on plankton, tiny crustaceans and other schoolings of small fish. From there they head down the coastline to the warmer waters near Mozambique, where they will breed and have their young.

The past few years with their numbers increasing so much they are spotted most days when going out on the boat. They love to put on a great show for the divers on the surface, by breaching their whole bodies out of the water, slapping their pectoral fins on the surface, which to me always looks like they are waving and calling you over to say hello.

Females usually have small calves with them, so you can often see the mothers teaching their babies to breach, which is extremely cute to see the calves practicing their breaching moves.

They are rarely seen on dives as they can be a bit shy, but have been spotted cruising over Aliwal Shoal, and their signature whale songs are heard by divers on most dives.

The Humpback Whales make a comeback in South Africa!

This is the practice of hunting and the killing of whales in order to sell their meat and fats. Commercial whaling was extremely popular in the 19 hundreds in South Africa as the whale meat and whale fats literally powered entire communities.

In the early 1970’s the whaling station in Durban was closed due to the number of whales becoming so scares that whaling ships and stations were unable to spot them down the South African coastline. It is estimated that during the ban of commercial whaling there were only 300-500 whales left along the South African coast, this shocking number put them on the critically endangered list.

A study in 2018 set out to see what difference the ban of the commercial whaling made over the past 40 years. The results were so phenomenal that is has shocked all the conservationists involved.

It is estimated that there are now between 30 000- 40 000 humpback whales moving along the South African coastline, which is a huge comeback in such a short period of time!

Seasonal Sightings On Aliwal Shoal During November to May

From my experience spotting these beautiful, stripped sharks on Aliwal Shoal, they tend to hang around more in the warmer, cleaner waters. They can be spotted on the baited shark dives as well as on the reef, so keep your eye out for their signature stripes when diving during these months!

When talking to the locals in the area they have expressed how much the Tiger Shark numbers have decreased over the years, the signature baited shark dives used to be known as the tiger shark dives with 8 of them being a more regular occurrence, whereas in recent years during season we can have one or two pull through on baited dives.

This being said, this last season operators had some amazing tiger shark action on baited dives and on normal reef dives.

According to Summer Newton who is studying the Hammerhead sharks in the Protea Banks area in South Africa; It is still unknown as to exactly why they migrate past Aliwal Shoal and Protea Banks in such large numbers.

It is however suspected that they could be on their way to or from their breeding grounds in the North. The Tugela River is a known nursery ground, where they birth their pups in the estuaries. In general, the hammerheads tend to swim in large groups during the day for safety reasons, the same way animals on land travel in herds, as there is safety in numbers, but at night become more solitary to hunt.

These mischievous rays can be spotted year-round on Aliwal Shoal and there is little evidence to show that they are seasonal. This being said, in 2020 massive schoolings of rays were spotted more regularly December to February.

The White tip reef sharks can be spotted year-round on Aliwal Shoal, but with the absence of the Raggies on the reef, December – May is the time of year where they are more likely to be spotted.

They like to spend most of their day resting on the reef floor inside small caves and overhangs and become more active at night. You can spot them swimming over the pinnacle ridge (a dive site on Aliwal Shoal.)

All Year Round Diving Destination 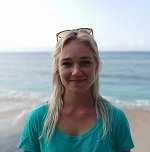 I am co-owner/founder of Travel To Dive. Also a PADI Scuba instructor. 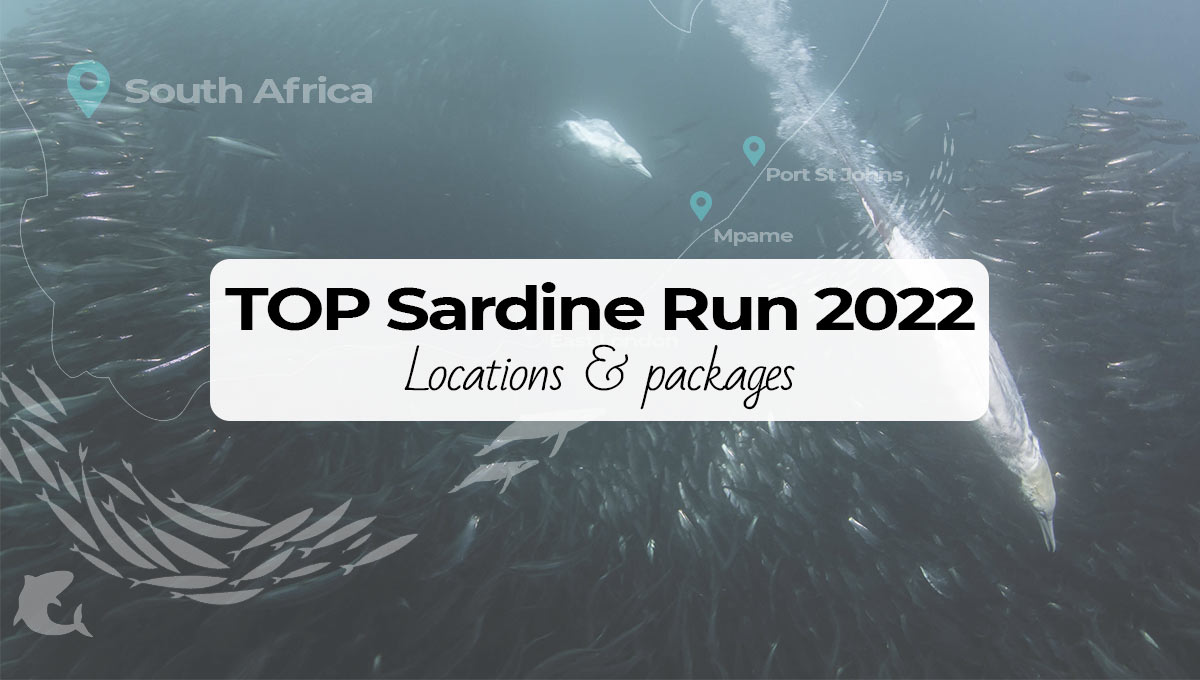 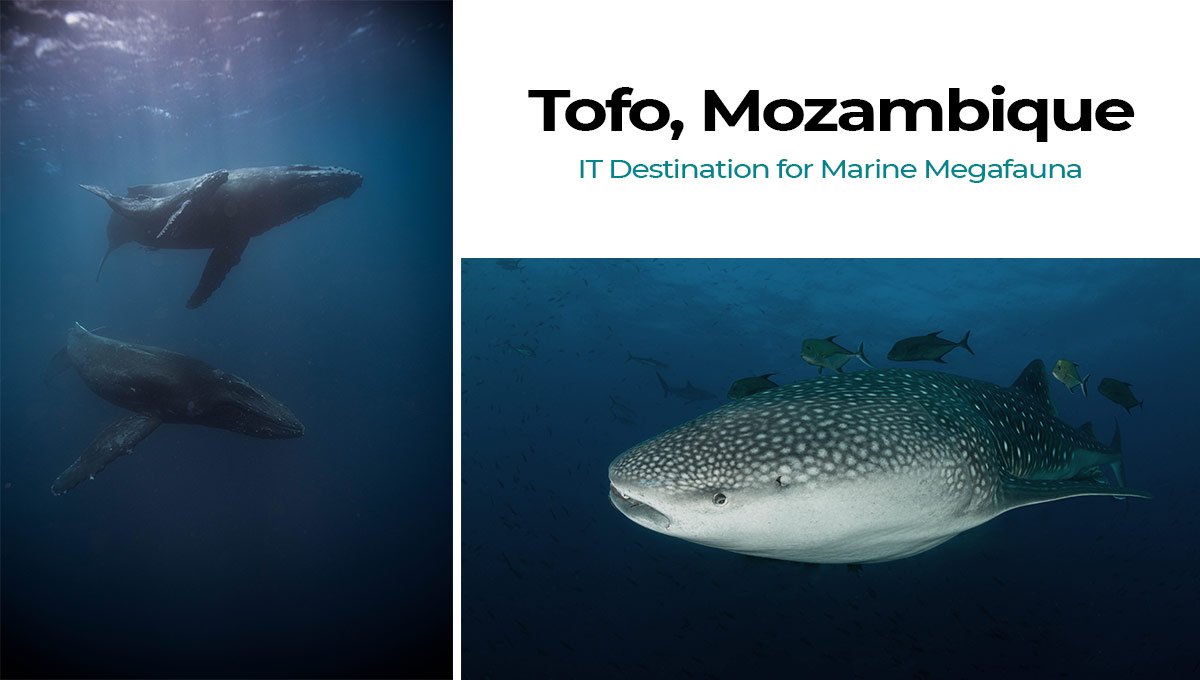 We have a lot more where that came from! Subscribe and be the first to know of new articles, insights on destinations and packages.